Charlotte’s journey, from captivity in chains to joy in the trees, shows the power of Jungle School to transform the mental, emotional and physical life of a traumatised orangutan. Charlotte’s name means ‘free woman’ in French. While she hasn’t yet been released into full freedom in the forest, every day she is one step closer to returning to the life that is her birthright. 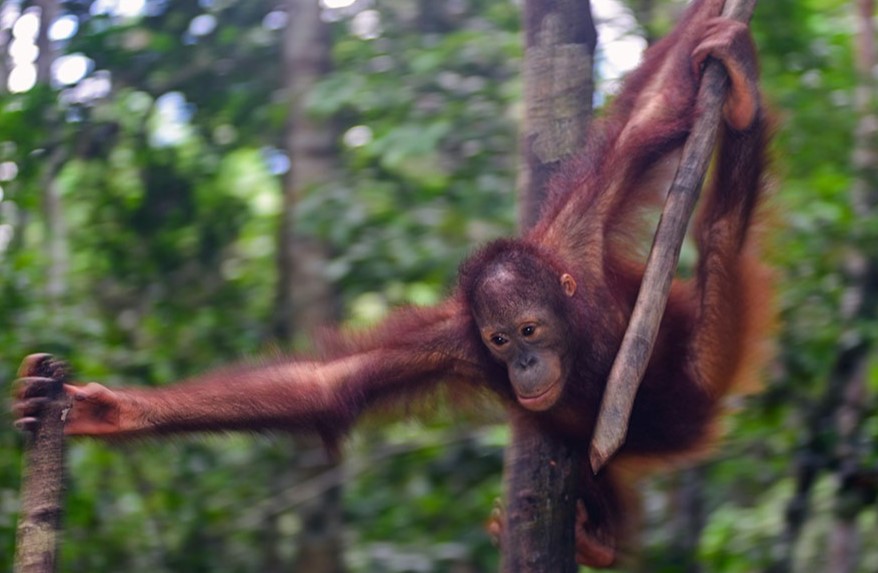 Orangutans learn everything from their mothers

When baby orangutans are stolen from the wild, not only do they lose their freedom, they also miss out on the daily lessons they need to survive in the wild.

Orangutans have one of the longest childhoods of any species on earth. Babies are born knowing nothing; they learn everything from their mothers: what to eat, how to avoid predators, how to make nests for safe sleeping, even how to climb and swing through the trees. Their learning is complex and deep, and nothing can fully replace the bond between mother and baby. You can support Charlotte's journey to freedom. 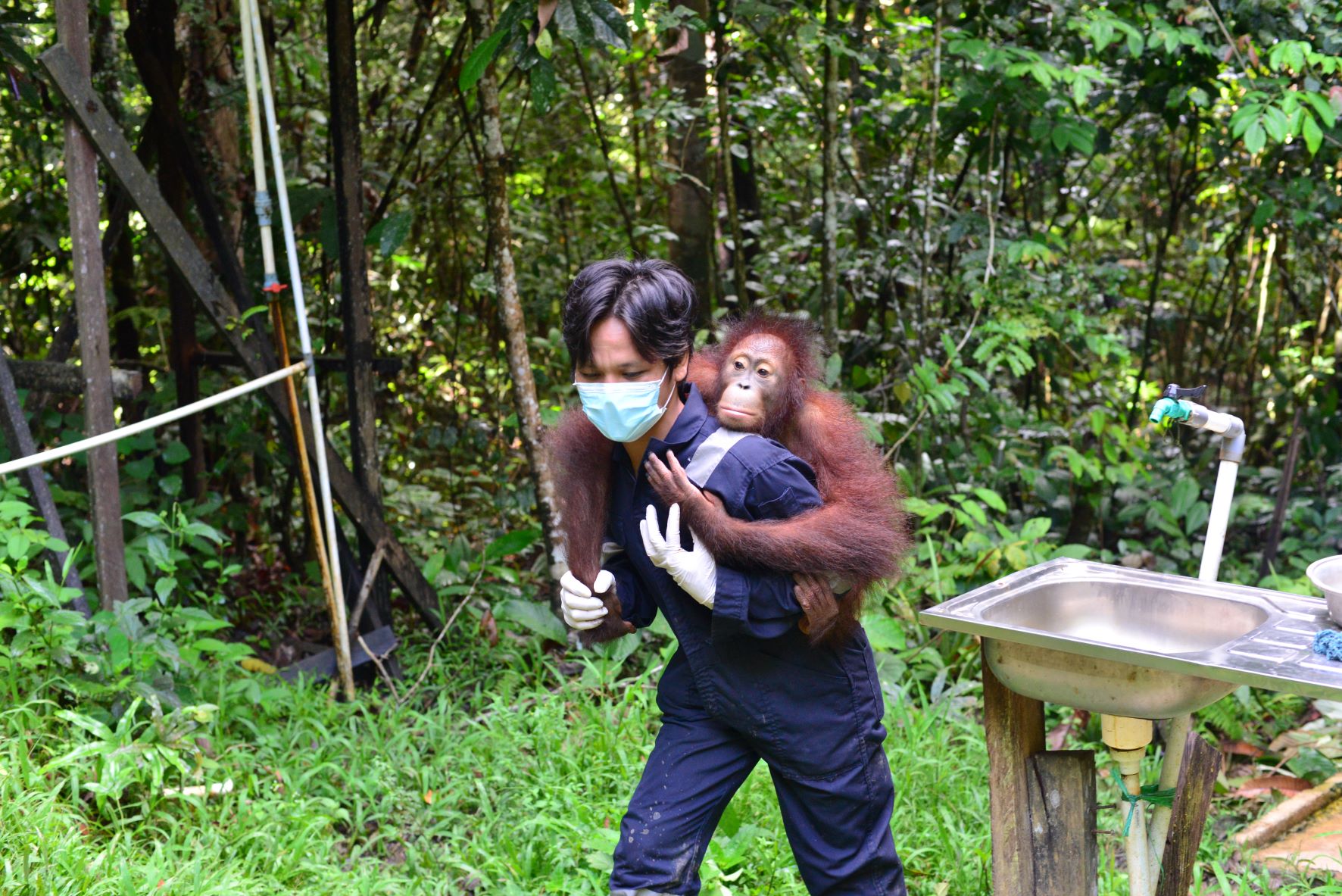 Above: Charlotte with one of her carers, Amir, carrying her to Jungle School

Without their mothers, and without these skills, young orangutans would die if left alone in the forest.

Rescuing an orangutan from captivity is just the first step in the long process of recovery, nurture and teaching. Human rescuers must be everything to these young orangutans: mother, teacher, carer, protector, food provider. Without their mothers, we are all they have. You can give Charlotte the gift of Jungle School.

Charlotte was a tiny baby when she was stolen from her mother. She most likely witnessed the traumatic killing of her mother before she was taken far from her natural home.

To further compound her mental anguish, she was sold as a ‘pet’ to a family in Sumatra. But she didn’t stay in the family home for long. As orangutans grow, they become bigger and stronger, and their human ‘owners’ can become afraid, sometimes resorting to methods like chaining their captive orangutans to control them. This is what happened to Charlotte. 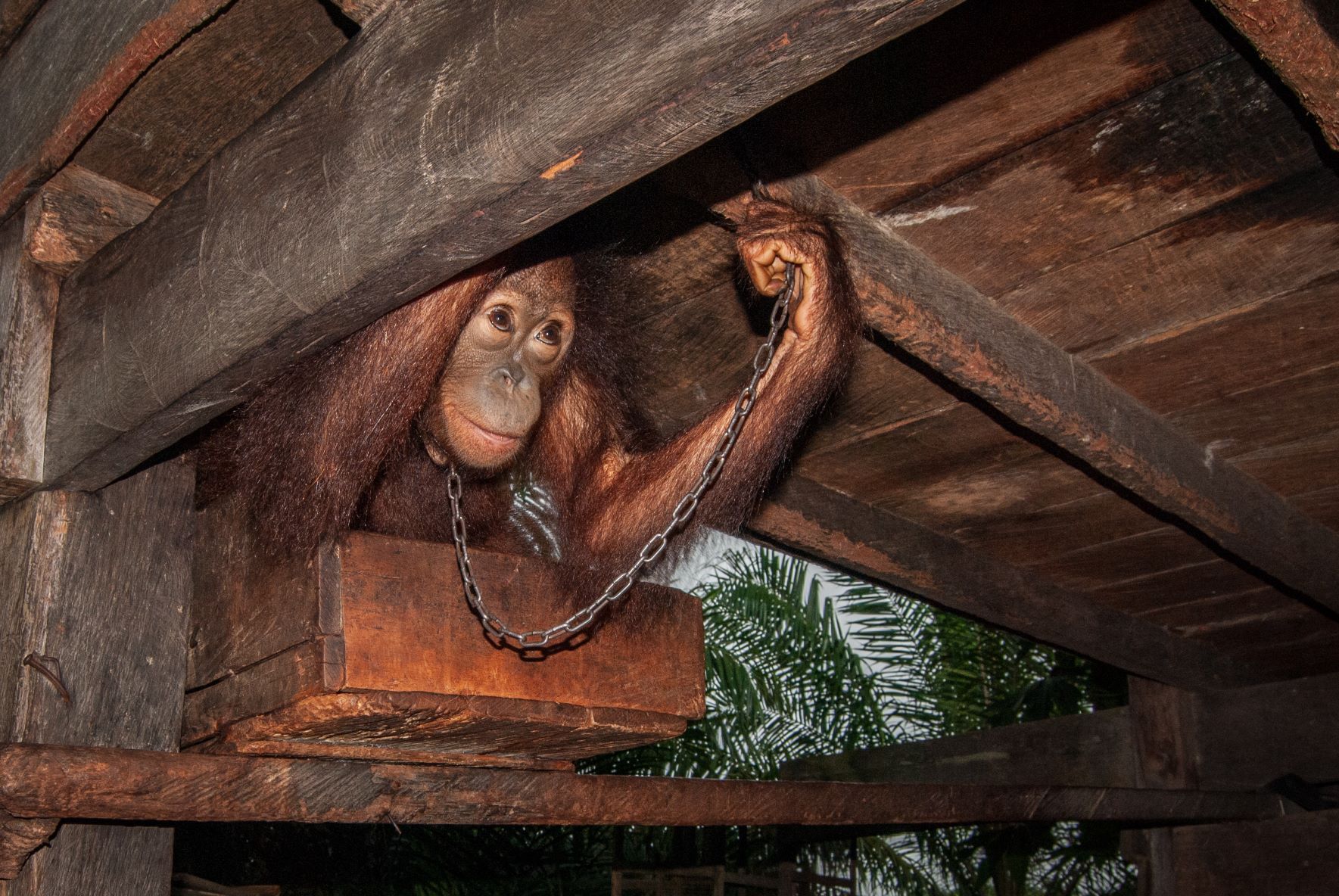 When our Bornean Orangutan Rescue Alliance (BORA) team found her, Charlotte was living underneath the deck of a house with a chain around her neck. We don’t know how long that  chain had been there, but we expect it was over two years - more than half her life. We also know that it was painful and severely restricted her movement. A terrible life for any being.

Not only was she not living wild and free with her mother in the forest, but Charlotte was also suffering, unable to move beyond the tiny hut and the ledge under the decking. 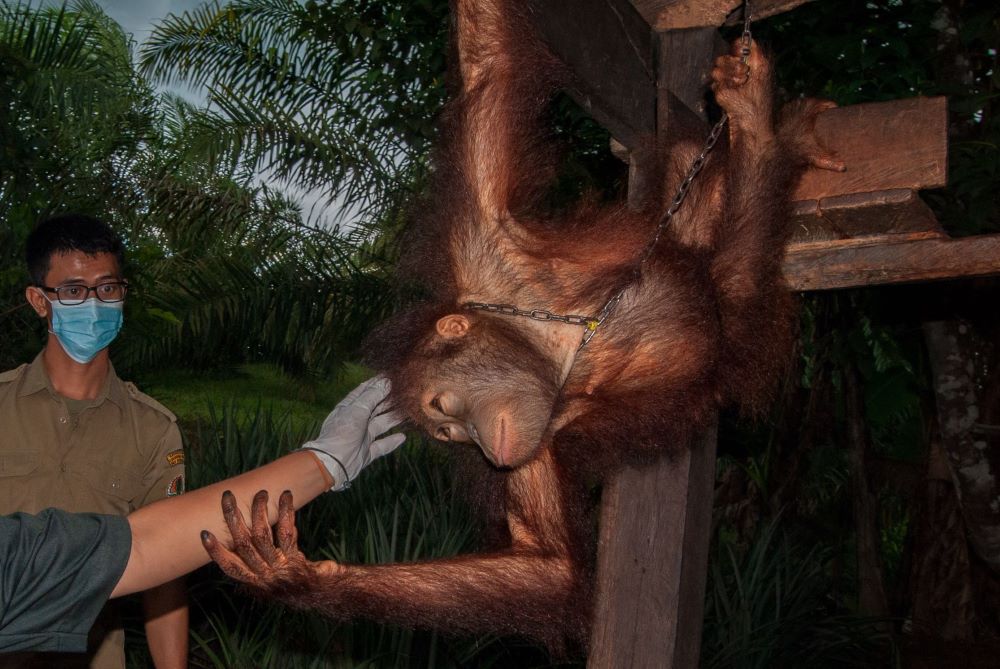 After she was rescued, four-year-old Charlotte didn’t know how to eat normal orangutan foods like pineapple, papaya, leaves and bark. She would often take a single bite then drop the food to the ground or simply play with the leaves like toys.

When orangutans are pets, they are usually fed the wrong food. Charlotte had been fed mostly on human foods such as bread, candy, chips and other sweet snacks. In the wild with her mother, she would already have known how to search for, identify and eat hundreds of different foods.

The only solution for orangutans who are rescued from the illegal pet trade is for humans to step in and help them learn the skills their mothers should have taught them for the first six to nine years of their life. That’s why Jungle School is one of the single most important tools we have to help orangutans like Charlotte return to a life of freedom in the forest. And you can fund one, two or even more Jungle School lessons for Charlotte today!

Below you can see Charlotte learning how to judge distances, reach for branches, and make her way through the trees during Jungle School.

Charlotte’s time in captivity has affected her in many negative ways - some we can’t even measure - but we hope she will continue to recover with our care and teaching.

To begin with, Charlotte was afraid of nearly everyone, and only allowed one male carer to approach her. She initially refused to come out of the sleeping enclosure and every new change in her environment made her retreat. The tragedy for a highly sentient person like Charlotte to be chained for so long can’t be underestimated. As an intelligent, thinking being, Charlotte would have suffered mentally as well as physically.

Jungle School is giving Charlotte a new lease on life - and showing just how resilient and joyful orangutans can be. The simple act of taking an orangutan out to the jungle is in itself powerful and healing. As soon as an orangutan is among the trees, there’s a change in their behaviour, even if they don’t yet know how to climb or search for food. 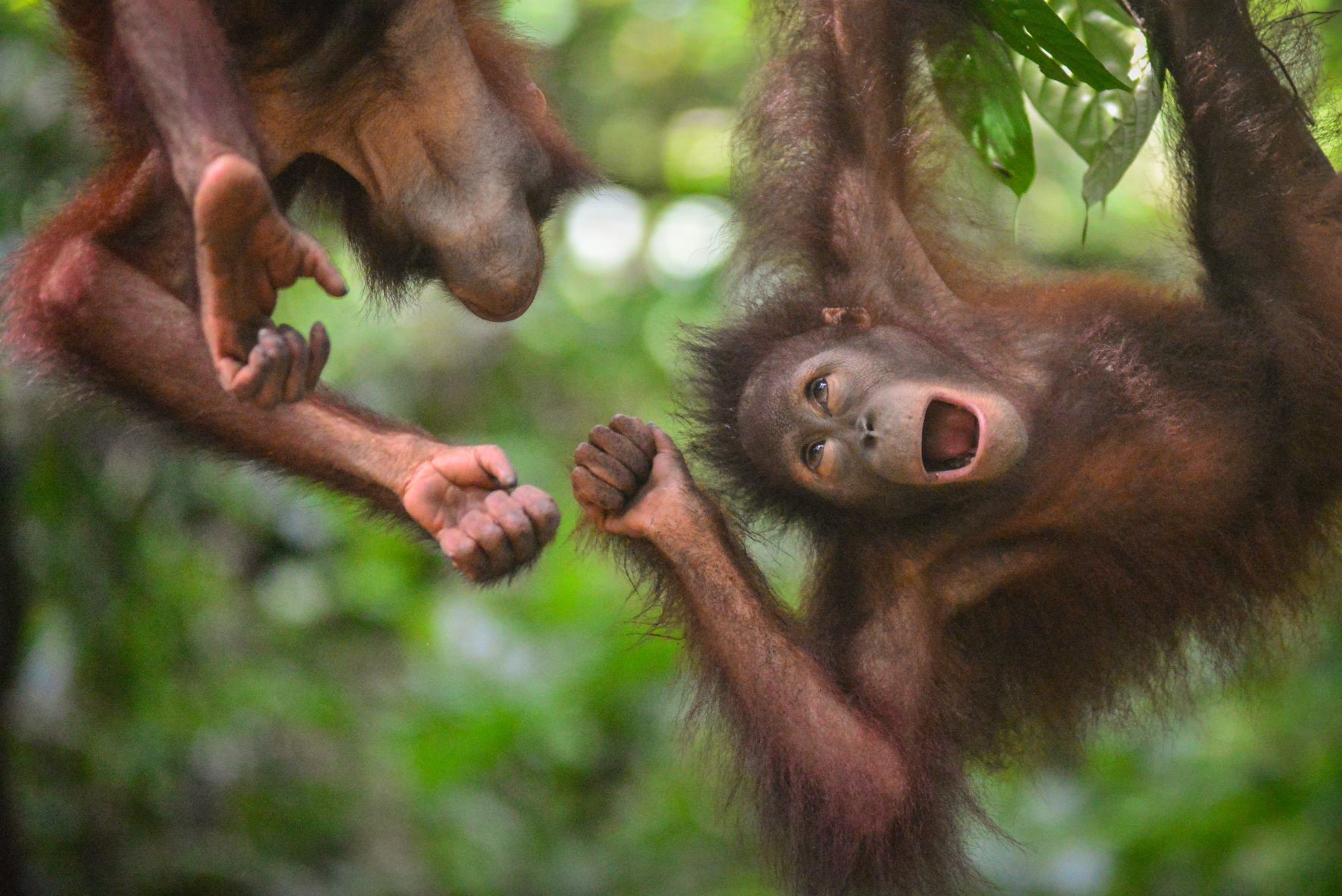 Jungle School is more than just school. It’s more than learning how to survive - it’s also emotional and mental healing that transforms a young orangutan from terrified to courageous, from shy to joyful.

Jungle School is the most important strategy in a rescued orangutan’s development. Carers teach young orphaned orangutans how to forage for fruits, leaves and termites. They encourage baby orangutans to climb trees, placing their hands and feet around slender saplings. They support them as they try to swing through the trees and move their hands across to branches.

Carers mime eating termites and show orangutans how to dig into a log to release the protein-rich snack. They demonstrate how to strip bark from twigs to get to the rich cambium layer inside. They show young orangutans how to bend leaves and twigs to form a soft nest for sleeping. 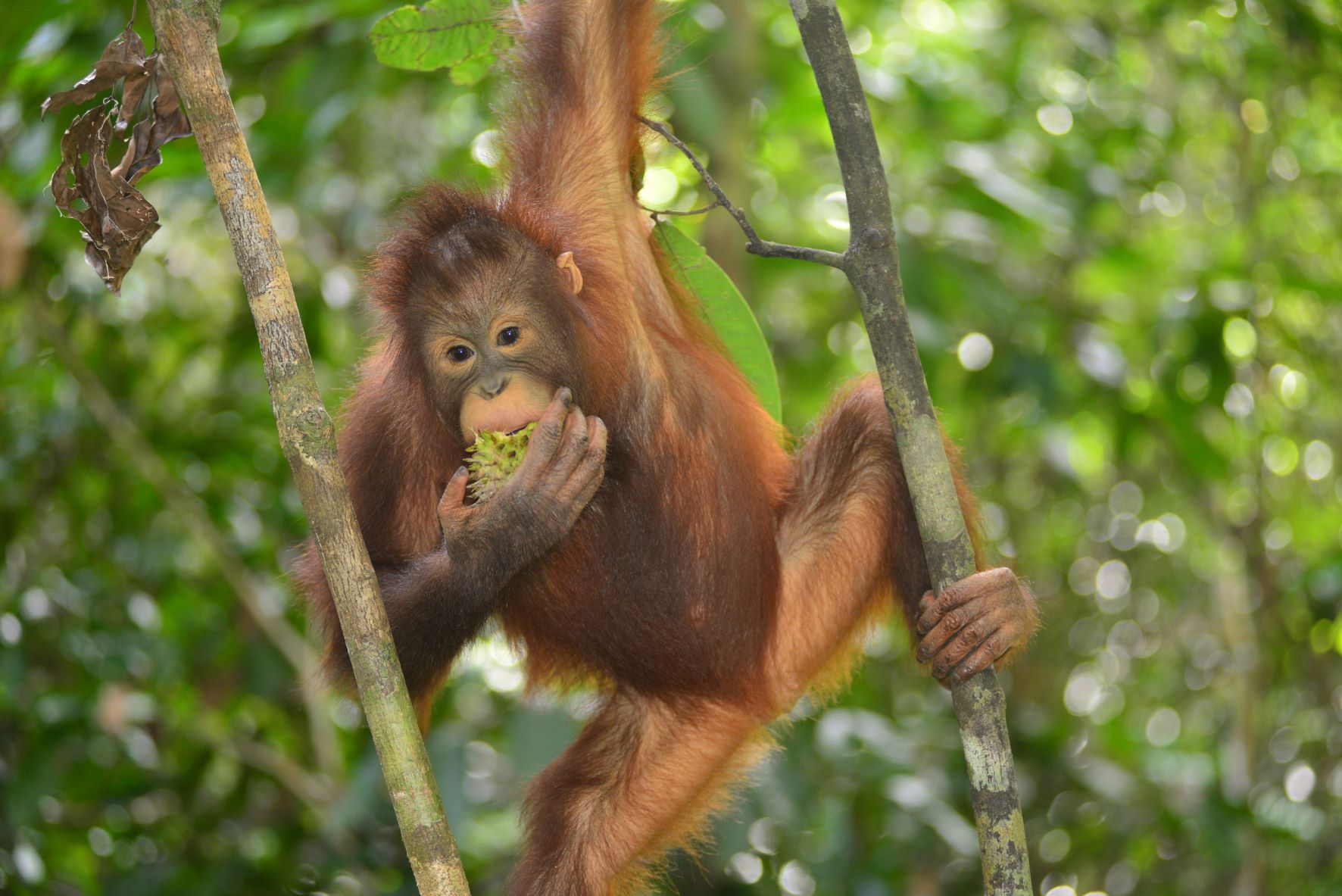 They provide this care and attention, over and over every day. And every day, orangutans learn, watch, mimic and grow. The role of orangutan carers and Jungle School cannot be underestimated. Without their carers, orphaned orangutans simply wouldn’t be able to return to the wild.

Relying on humans for the rest of their lives for food, water and shelter is not a future we want for any orangutan. Although we know some orangutans can never be fully free in the wild, due to disabling injury or illness, our mission is to return as many orangutans as we can to live wild and free in their natural habitat.

For Charlotte, Jungle School is opening up the world for her. Previously chained by the neck under the deck of a family home, she’s now learning how to reach for the branches, climb the trees, and become the wild, free orangutan she was meant to be. 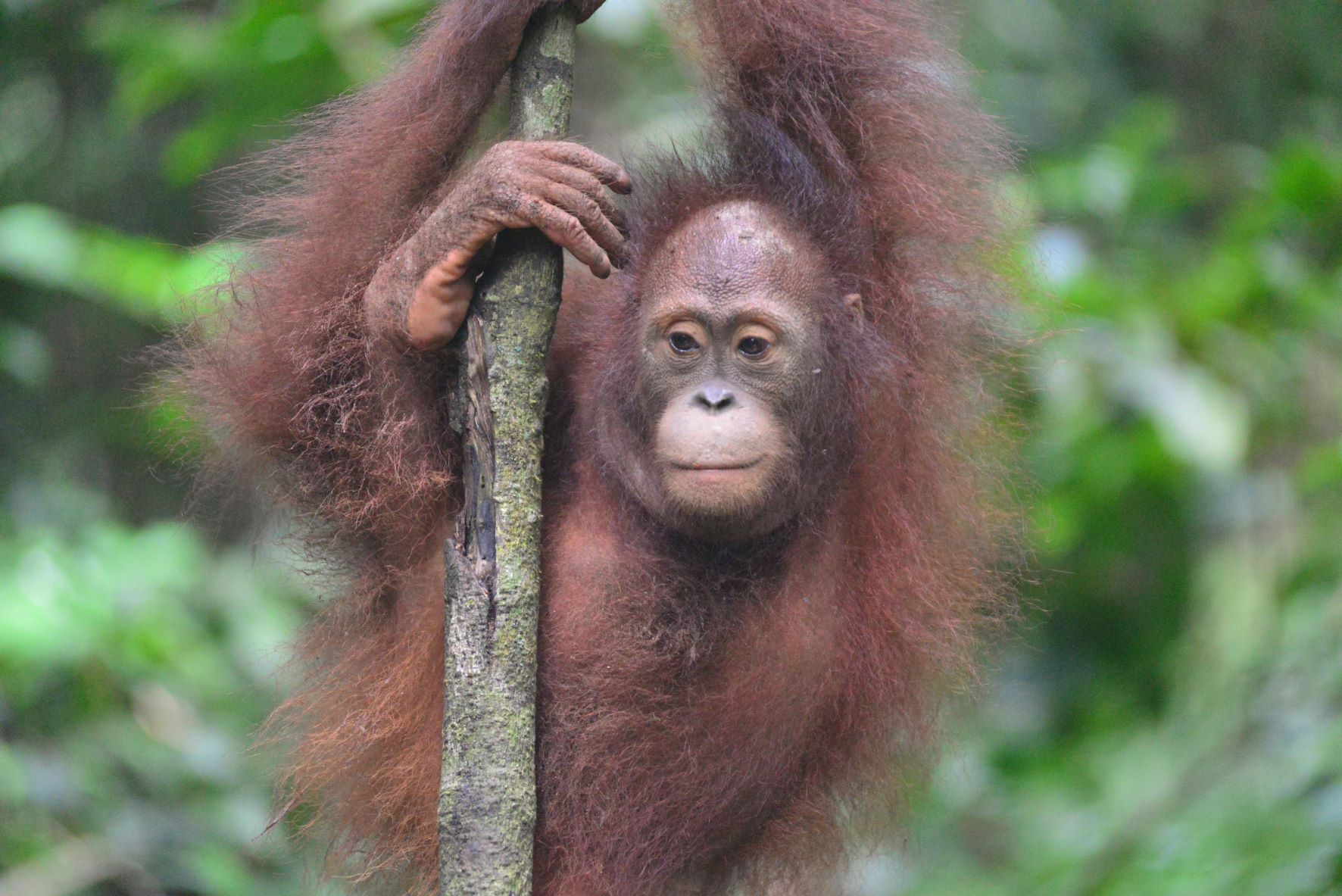 Charlotte has a long way to go before she will be able to return to full freedom in the Sumatran rainforest. Her rehabilitation will take years. Her orangutan carers will be there every step of the way. Will you be there with her, providing the support she needs? Click here to help Charlotte return to the wild. 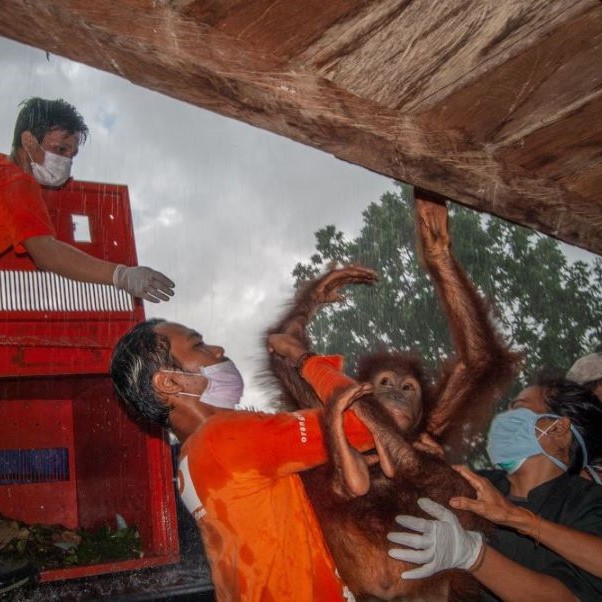 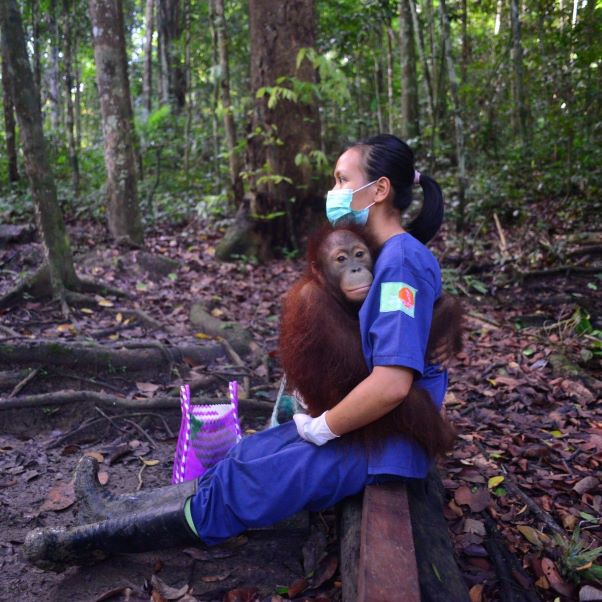 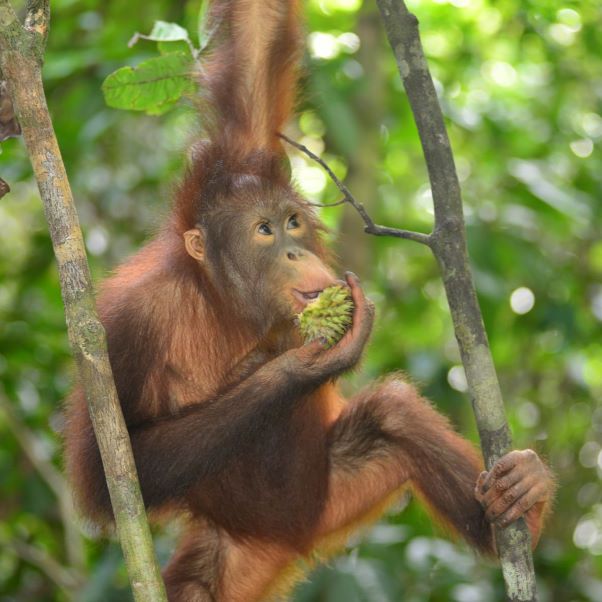