In April this year, our Bornean Orangutan Rescue Alliance (BORA) rescued a wild young orangutan from a rubber plantation. The plantation owner reported that an orangutan had been coming into the plantation and they were concerned about her wellbeing. Our team travelled to East Kalimantan and removed the one-year-old female, taking her to our BORA Rescue and Rehabilitation Centre. She had been put in chicken cage sized 1 x 2 metres, so we're pleased we were able to remove her. Your gift today will help us rescue more orangutans like Eboni. 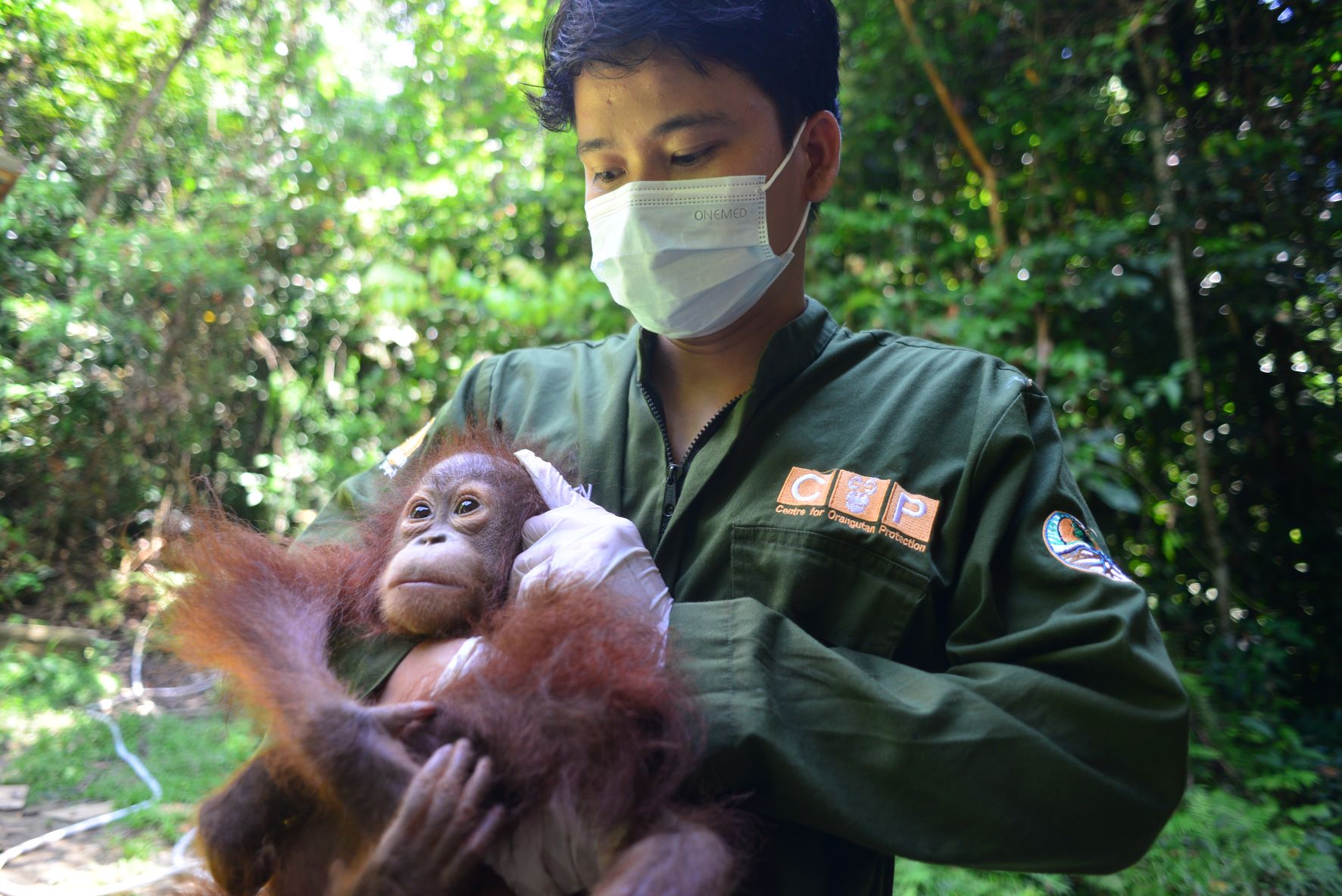 We reached out to one of our donors to name this young rescue, and they chose Eboni because her eyes were a dark brown. Ebony is a name of English origin that means dark, after the black wooded tree ebony. Our supporters chose to spell her name with an ‘i’, rather than a ‘y’, as this is the Malay spelling.

Although the plantation owner said Eboni had come into his plantation, we expect Eboni’s mother had been killed, as a mother orangutan will fight to the death before her baby is taken from her. We also suspect that Eboni had only recently been orphaned, as she was quite wild when we rescued her from the plantation. If this is the case, her memory of the forest and all the skills she’s already learned from her mother will help her in the future. 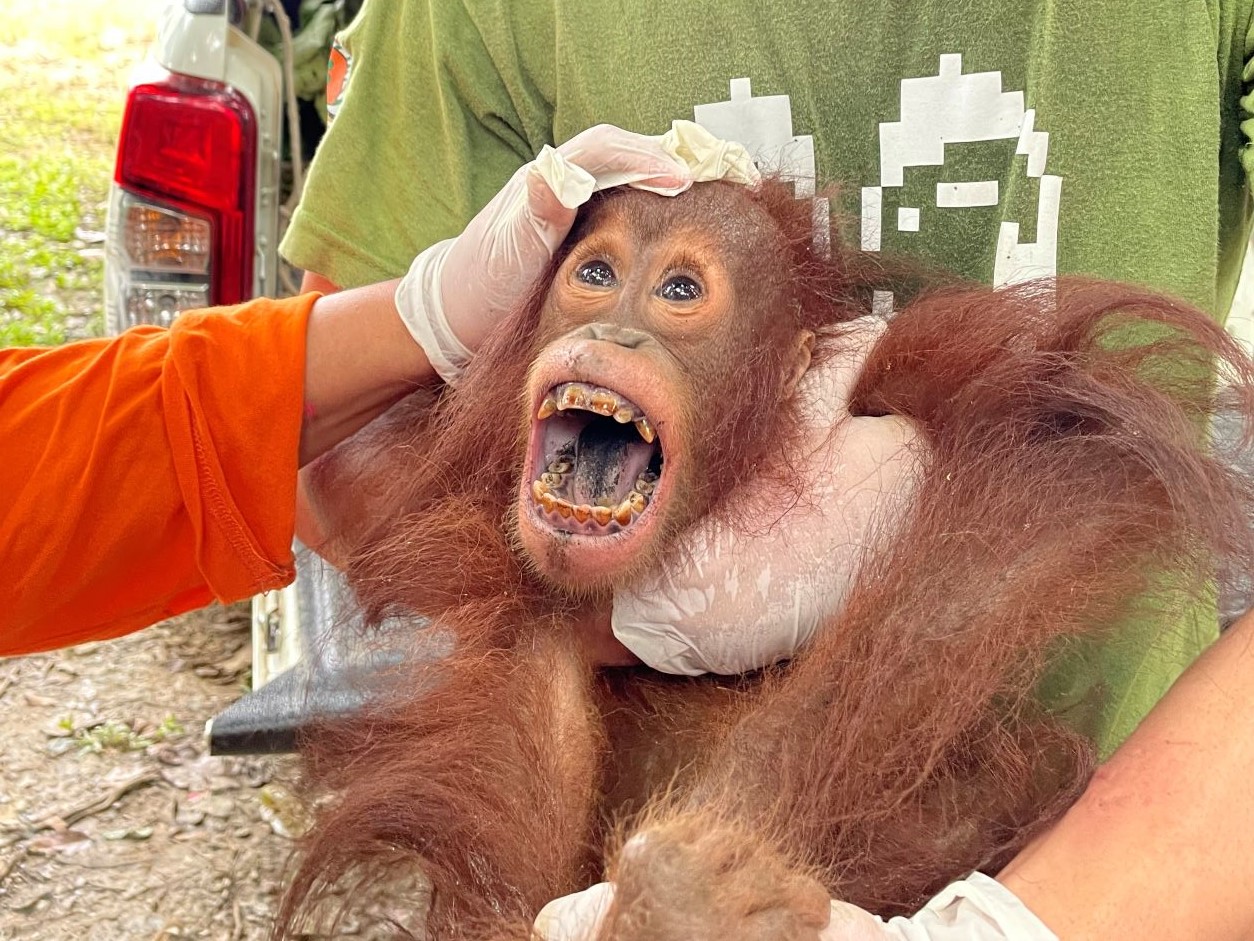 Above: The black sticky substance inside Eboni's mouth when she was rescued is very obvious in this image

Eboni has now been at our care centre for about six months, and it’s been a challenging time for her. Initially, the team were quite concerned about her health as she had a black coating in her mouth. The suspicion was that she’d been eating rubber latex, given she was found in a rubber plantation. Fortunately, the black sticky substance has dissipated over time and her health is improving.

Eboni is quite an active young orangutan, and the good news for her long-term survival is that she’s still very keen to keep her distance from humans. Once she calmed down a little, however, we were able to undertake a medical examination, which showed she’s relatively healthy. 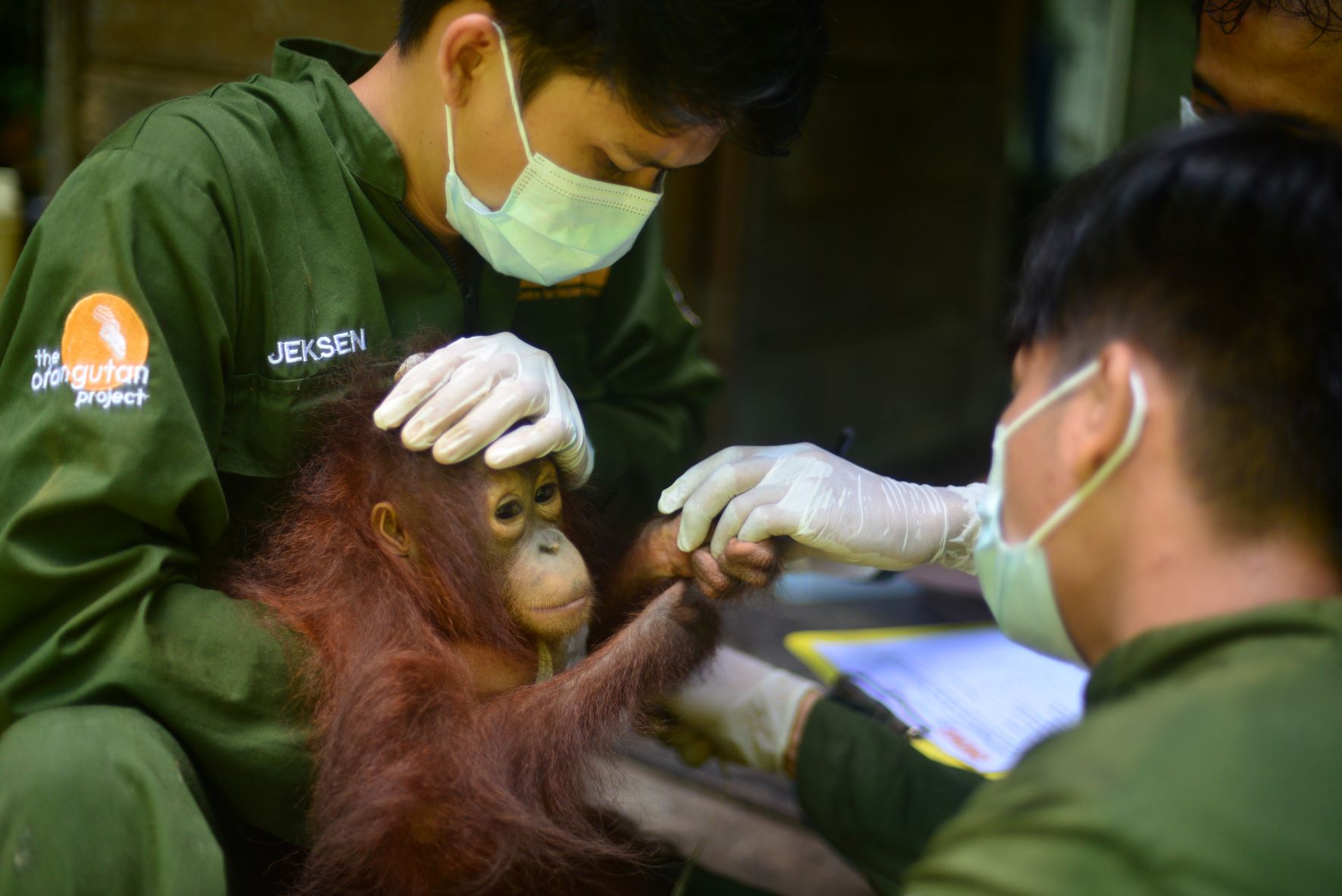 Although she’s quite wild, she will need years of Jungle School and human care in order to learn all the jungle survival skills she should have learned from her mother. The tragedy is that this wild child will now need to adapt to human presence in order to learn the skills she needs. We hope that in the years to come, her wildness will be maintained, and she’ll also quickly demonstrate the ability to survive alone in the jungle.

Donate to our rescue and rehabilitation program to help Eboni and all orphaned orangutans like her.

Below: Eboni in the transportation cage before being transported to our BORA centre, our Field Manager Hardi removing Eboni from the plantation, and the chicken coop in which she'd been kept 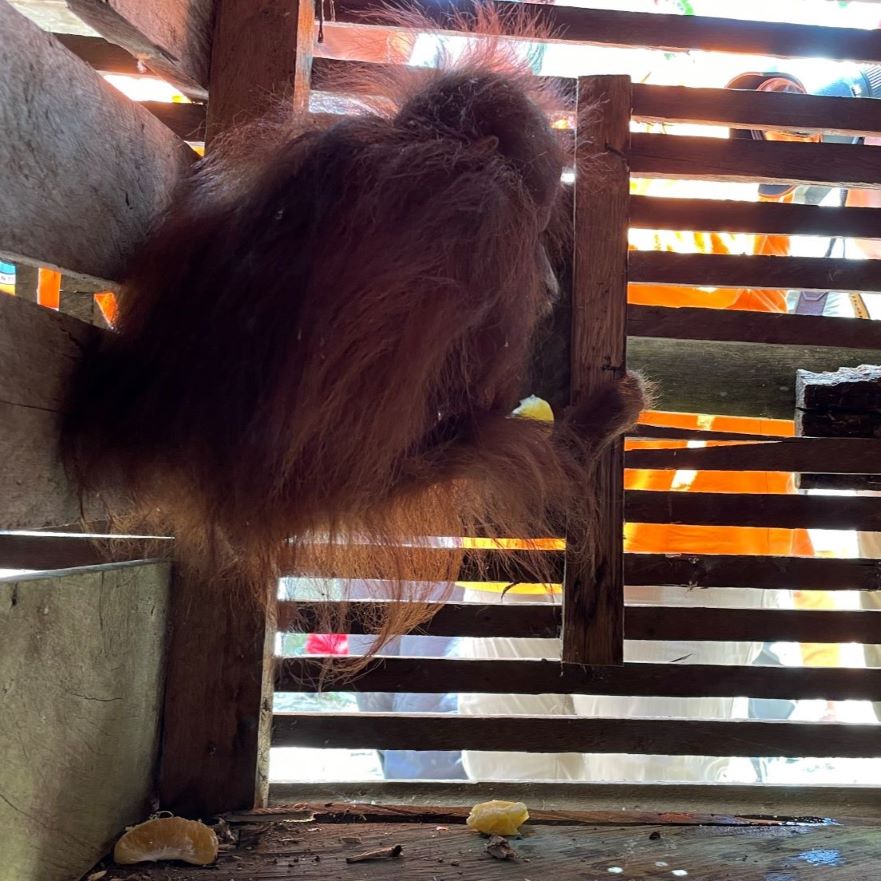 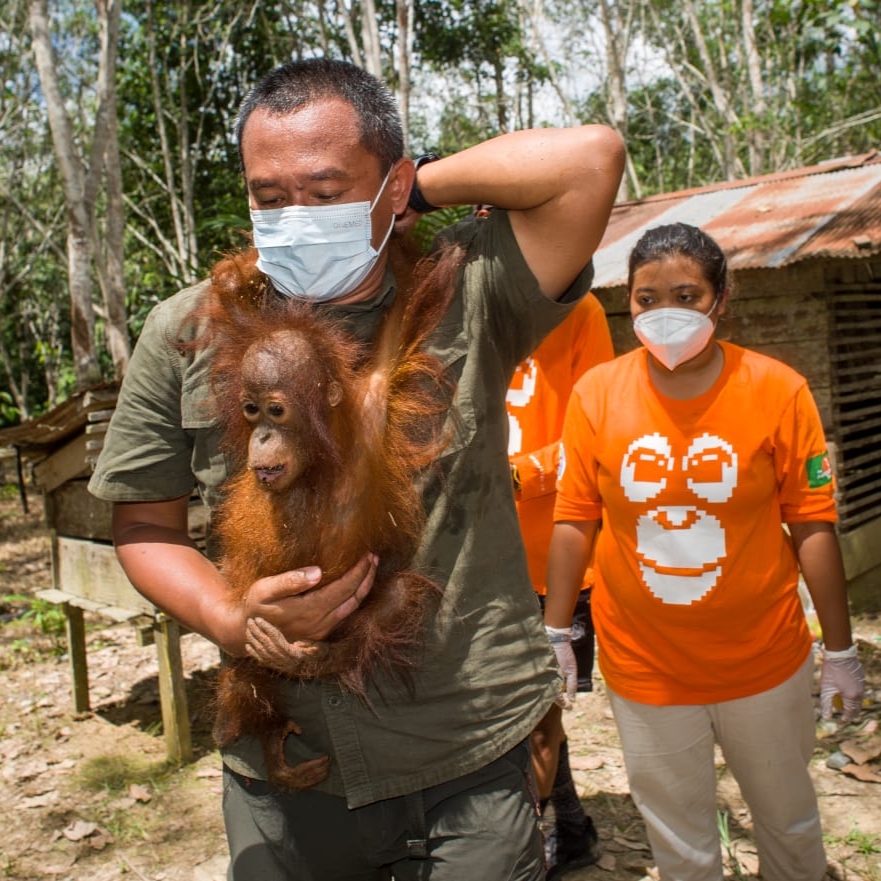 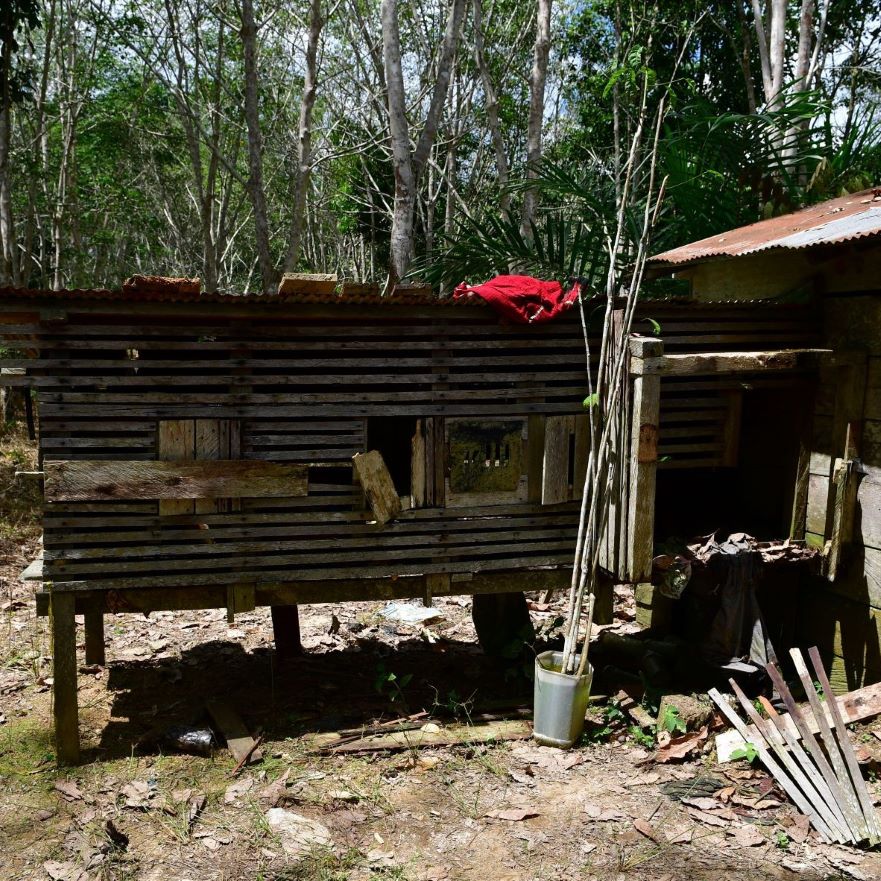