These brave teams search for and investigate illegal activities within the area including encroachment, illegal logging and poaching. They are also heavily involved with wildlife monitoring and are experts at detecting the presence of various species including tiger, orangutan, elephant and tapir. The members of the Wildlife Protection Units work in very tough conditions and have to make their way through all sorts of rugged terrain. Some areas are only accessible on foot or on off-road motorbikes. The Orangutan Project funds the Wildlife Protection Units to help protect the diverse wildlife in the BTP ecosystem. This includes over 150 critically endangered Sumatran orangutans that have been released into this forest.

Acui is one of the dominant females in this area and she also has a daughter named Amina. Acui’s new baby boy was born on 23 January, 2015 and he has been named Ariel. Acui was followed for ten days after staff confirmed that she had given birth to make sure everything was going well and that the infant was strong and healthy. All three orangutans have recently been seen around camp and all are healthy and active. It is fantastic that Amina has the opportunity to observe and learn how to raise a baby by watching her experienced mother. This will assist her greatly when she has her own offspring in the future.

TOP fully funds the running costs of Camp Rasak in the Lamandau Reserve so it is wonderful to see that the orangutans are flourishing in this location. 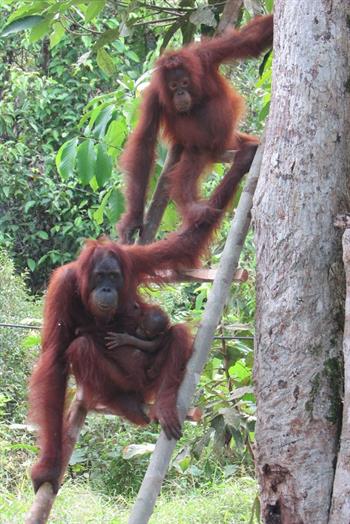