The Wildlife Protection Units (WPU) in the Bukit Tigapuluh National Park, Jambi, Sumatra, have been focusing their patrols on the southern buffer zone of the ecosystem.

This area is the most vulnerable to forest encroachment and other human disturbances. This buffer zone was sub-divided into five patrol sectors, with 1275 square kilometres of forest being surveyed in total. Mapping and monitoring of encroachment and other illegal activities was focused on. The target was to map high priority areas for anti-encroachment patrols; to map and document encroachment in high priority areas and forward the results to the law enforcement units. A total of five WPUs patrolled key areas in shifts with a routine schedule for each team of 21 patrol days (including transport and reporting) and 10 days off each month.

Wildlife monitoring carried out during the third quarter of 2014 recorded the following key findings for various animals:

The sample of photographs (from top down), taken by the WPUs to document illegal activities includes: Encroachment to establish illegal fields and oil palm plantations, a logging and poaching camp, snares de-activated by WPU, illegal logging. 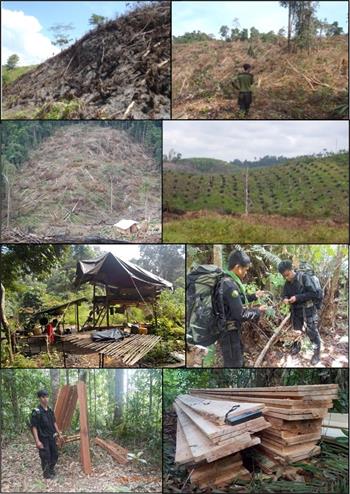