We were thrilled to inform our adopters in December that Emil, one of the original orangutans in our adoption programme, was released into the Seruyan Forest in Central Kalimantan in August, 2014.

Emil arrived at the Orangutan Care Centre and Quarantine as a small infant in 2001. He was a friendly, active infant whom everyone loved.

Due to Emil’s excellent forest skills, he was identified as a release candidate for 2014. During his forest outings, Emil would venture deeper into the forest than many of his other orangutan peers who still preferred to stay within sight of their caregivers and other orangutans. Emil was perfectly content when by himself in the forest but, just like wild adolescent orangutans, he also enjoyed traveling occasionally with a friend.

Emil is a very observant orangutan. As he climbs up the trees, he ambles slowly and stops frequently to survey the forest around him. Emil also has excellent foraging skills and is very resourceful. Since he spends most of his time in the trees, leaves are a common snack. And like many orangutans, Emil has a sweet tooth for termites and ants. But he has a few unconventional tastes as well including mud and bark. These might sound unappetizing, but these items can be a good source of nutrients! Sometimes a wild orangutan needs to be creative when there is a shortage of more tasty foods.

Emil was fitted with a subcutaneous radio transmitter a few months before he was released. He was released with male Virgo and females Septi and Sophie. Staff are confident that Emil will succeed in the wild due to his range of forest skills including excellent foraging and feeding habits. Thank you again to all of our adopters who make success stories like this possible. Emil is now back where he belongs!

To adopt an orangutan and help others return to their true forest home please click here. 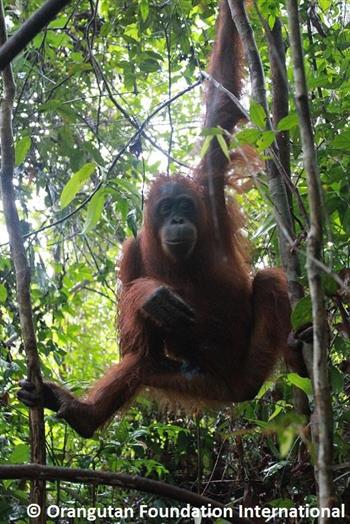