IAR Update on their latest rescue!

The IAR Orangutan Rescue Team recently underwent a treacherous journey to save a male orangutan named Wawa from a terrible life.

Wawa had been kept for years chained to a tree by his neck at the back of a house in a village named Sanggau, near Pontianak in West Kalimantan. Wawa’s ‘owner’ had kept Wawa for five years after purchasing him from a friend in Ketapang.

Wawa is about 5-6 years old, has very little hair and bad skin. This is due to being malnourished for years after being fed on rice and sweet drinks. The chain Wawa had been kept on was quite short so he had also never been able to move around and exercise.

Wawa has quite a sweet and calm temperament but he will bite when he is in a stressful situation. Wawa is currently safe at the IAR Rescue Centre in Ketapang where he will now undergo rehabilitation. Another great effort by the IAR Rescue team which is funded by TOP!

We just wish there were not so many orangutans that needed to be rescued. 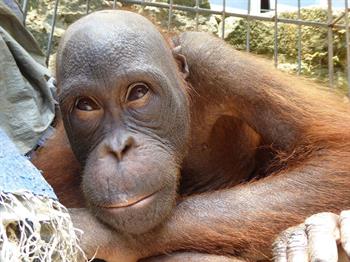