Rocky lives at the IAR orangutan rescue centre in West Kalimantan and is now 11 years old. 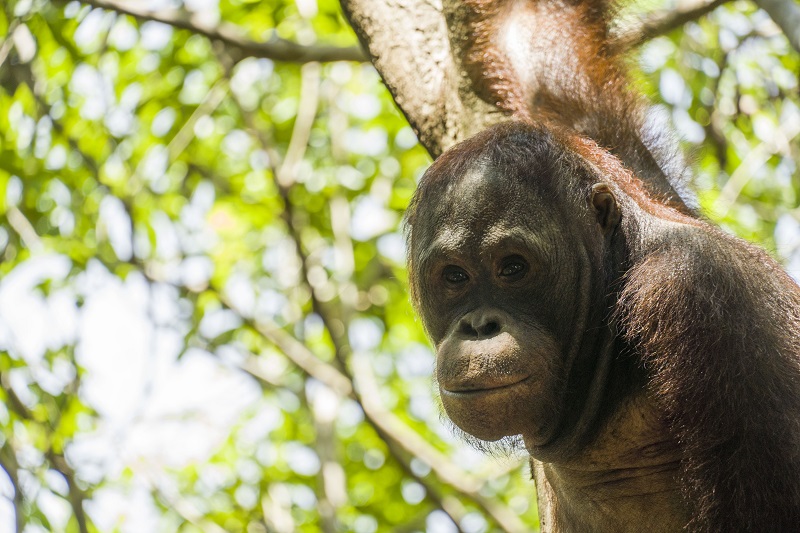 Handsome Rocky on his forest island

He already weighs in at 42kg and is quite large for his age. Rocky is a very smart orangutan, and he knows how big he is! Because of his large size it is not uncommon to see Rocky stealing the food of other orangutans on the island. But Rocky is also a pacifist and he never gets angry or resists when somebody else steals his food.

Rocky's foraging ability is very good. The keepers observe him avidly foraging around the island throughout the day. Rocky’s diet includes a large portion of natural food from the forested island however he still receives food provided by the orangutan keepers. The rapid increase in Rocky’s travelling activities makes him extra hungry. Fortunately, he is not a picky eater and will eat anything that he finds in from of him. On the island, Rocky spends a lot of time in the trees foraging for fruits and other items, but when travelling, he will mostly do it on the ground.

During the last six months, travelling become Rocky’s dominant activity. Rocky expanded his area of exploration on the island very rapidly. He became a true explorer and began to exhibit more solitary behaviour. Unfortunately, along with this increase in exploratory behaviour, came almost daily attempts at trying to escape from the island. Rocky would not only try this during the day, but also at night! He would usually take a nap in the afternoon, but then resume travelling and trying to escape from the island again in the evening as it became dark.

Because of this risky behaviour,Rockyhas had to be temporarily removed from Setrum island. He is being housed in a temporary enclosure until he can be relocated to a more secure island or forested enclosure.

Oh Rocky, you are a cheeky one indeed, but we know that your independent, brave, and curious nature will serve you well when you are released in the future. 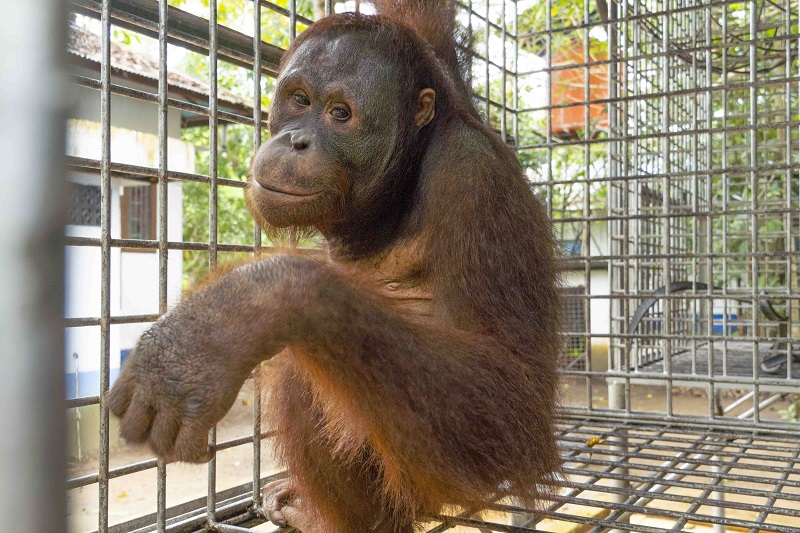 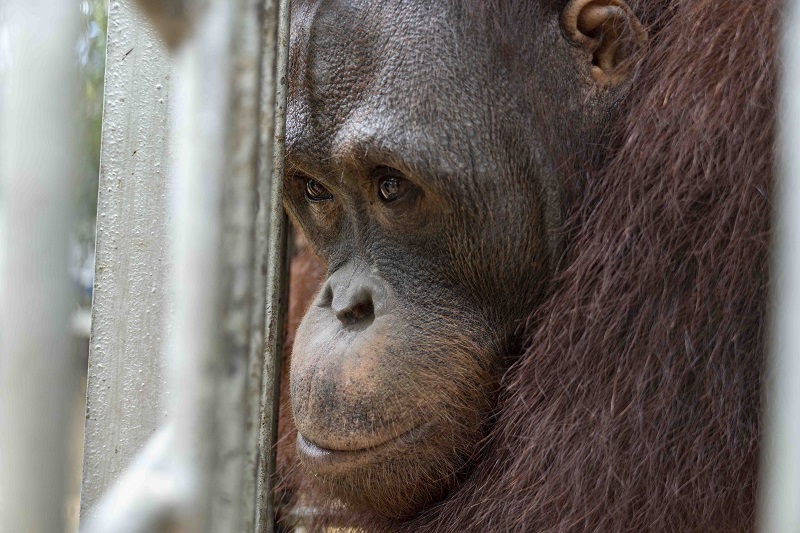 In lovely, albeit surprising news, orangutan keepers and medical staff discovered that Rickina was pregnant in April at the IAR orangutan rescue centre in West Kalimantan.

It is likely that Rickina’s age was underestimated. It is difficult to accurately estimate the age of orangutans living in human environments since these unnatural conditions impact their growth, weight, teeth, and hair growth - all the markers that are used to age them. Moreover, the age of maturation of wild and captive female orangutans varies a lot. Therefore, the IAR medical team tries their best to never rush into using contraception too early and, of course, neither too late. Hence, although Rickina was on the team’s radar to receive an implant soon, because her age was slightly underestimated, it turned out it was too late and Rickina became pregnant whilst on the island. Rickina was moved to an enclosure late in her pregnancy to ensure a safe and monitored delivery.

Rickina gave birth to a beautiful baby boy on 21 August. This precious little fuzz ball has been named Ricko. Both are doing very well so far, and the veterinary staff are monitoring their health and condition closely. Rickina is a very sweet and caring first time mother. Since he was born, Ricko has shown a strong attachment to Rickina and has suckled well. He has also shown very good responses to environmental stimulus. Rickina—as any first-time mother— is still in the process of adapting to becoming a good one. She sometimes seems to forget that she is holding a baby and will sometimes squash little Ricko against the mesh. Ricko will protest with a cry and Rickina will quickly move and comfort Ricko. It can be adorable to watch, although Ricko might not think the same of his clumsy mother.

When Rickina was last weighed, she was 35 kilograms. The medical team has not been able to weigh Ricko yet because he is still too small. While in the clinic, Rickina receives special enrichment to keep her busy and entertained while Ricko sleeps. Enrichment such as wooden blocks are attached to the mesh and filled with various food such as seeds, honey, fruit pieces, and insects.

So far, there is no plan yet to move Rickina and Ricko back to a pre-release island. The IAR animal management team still needs to observe them closely for a little longer before they can decide when Rickina and her baby can return to Jungle School.

It is wonderful to see the precious bond between Rickina and her sweet baby boy. It is also exciting to know that little Ricko will soon be growing up in a lovely, forested area as Rickina continues her rehabilitation journey. 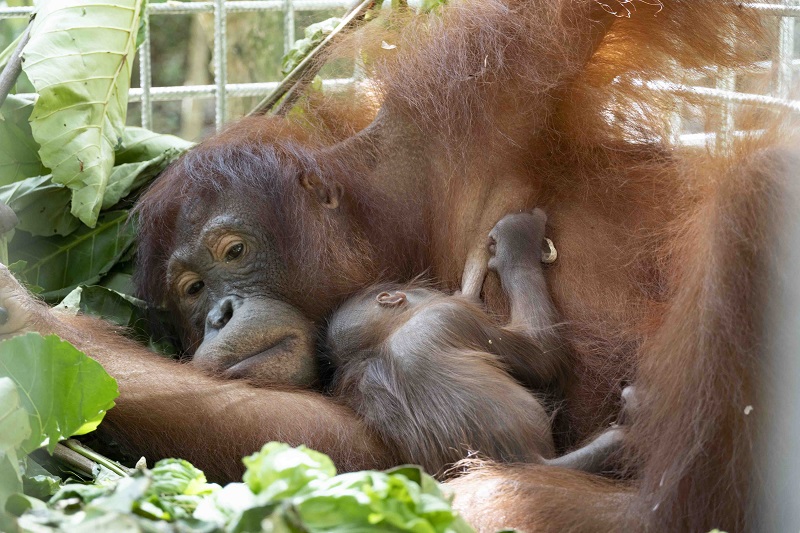 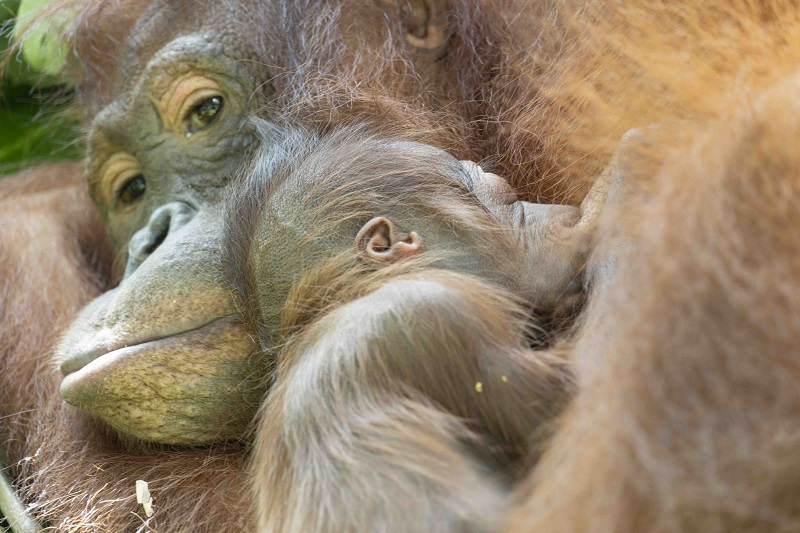 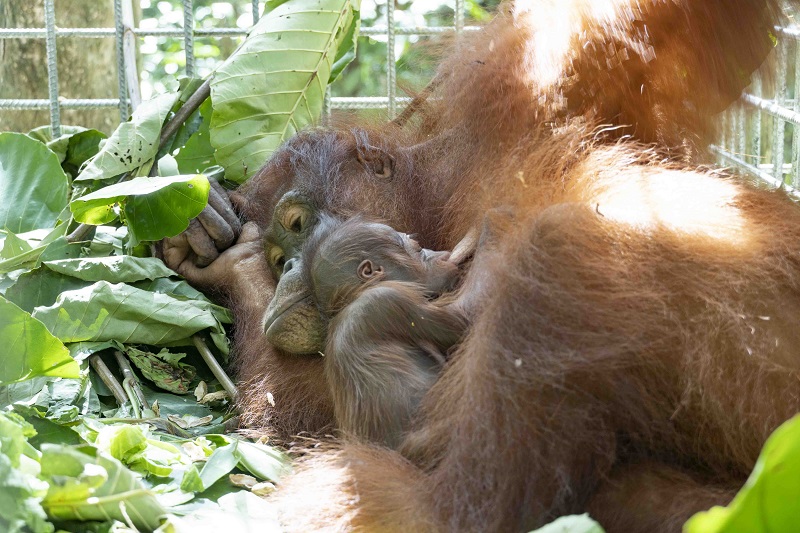 Doting mum Rickina and little Ricko who loves his milk