Orangutan Lear has always been rambunctious and mostly hairless but a favourite of all! He is still rambunctious, so much so that at the beginning of 2014, the caregivers at his facility were run ragged and suggested he be moved to a facility with the “big” boys and girls one age-group up!

Some remember Lear very well as the large infant orangutan who would discreetly get down from the swings and ropes of the playground structures, sneak around on the ground, and nip ankles from behind to get people’s attention. He’s not interested in doing that now since he has a whole forest to investigate!

Some months ago Lear was moved from the Care Centre to a facility in the larger forest that is maintained some distance away from the Centre. He is now with slightly older orangutans. Lear is still mischievous but very much enjoys playing and moving through the trees, something that was difficult in the playground environment where the tall trees were some distance away. Lear was never one of the ‘runners’ who raced to the distant trees and had to be retrieved by assistants on  motorbikes since it was too far to walk! But he liked to explore and now has the whole canopy to discover.

He is also beginning to grow more hair although, certainly, one would not describe his body as bushy. But that day is coming if all the short hairs on his arms and legs continue to sprout and grow. He is much calmer now and not so interested in cuddles or being on the ground. Increasingly, his forest foraging and arboreal locomotion skills are growing. Lear can still be very energetic and he has a determined personality so moving from the playground to the trees was an excellent step for Lear. Lear has proven that he is a very capable orangutan and it is hoped that his next move will soon be to the great forest in the wild! 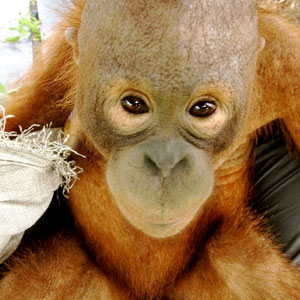 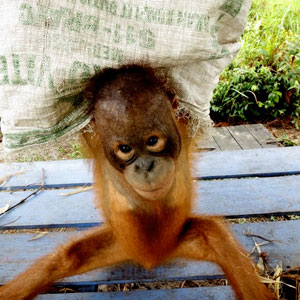 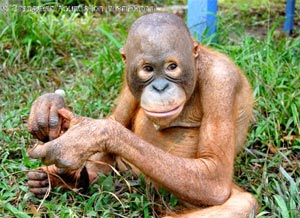