Chocolate is in good health and is progressing well. Chocolate was a fussy eater when he arrived at the centre. However, now that he has moved to the quarantine cages, he is eating all of fruit and vegetables given to him.

This is probably due to the competition with the other orangutans in his group. His favourite foods are durian and Cempedak.  Chocolate has started to naturally wean himself off the milk offered every day. This is a positive step in his preparation for release back to the wild.

Chocolate interacts really well with the younger orangutans in his socilaisation block. He is particularly close with a young female named Seroja. They spend a lot of time together and sleep in the same hammock during the night. Chocolate has also begun to build nests for his night time sleep and shares the nest with Seroja.  Chocolate has been seen to be quite brave by interacting in a positive manner with the larger orangutans in the socialisation block next door. One of his favourite activities is playing with his friends under the water tap during the day and getting entirely wet!

At times when he is nervous, he will sometimes suck the chest of Seroja. This is an anxiety behaviour that Chocolate developed from the trauma of his capture, losing his mother and being held as a pet. Chocolate will at times not want to interact with other orangutans, and can be seen to be resting by himself. However, overall he is developing into a confident and self-taught orangutan which is fantastic. 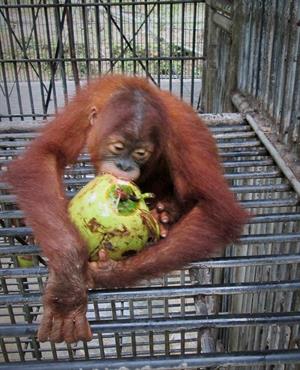 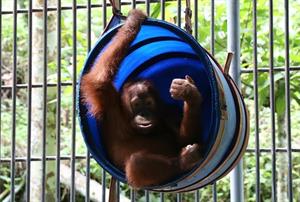 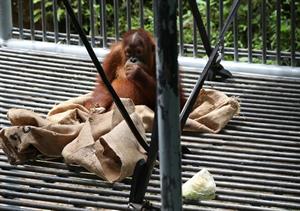