Carlos loves the enrichment toys he receives from the technicians. Once he gets a toy, he will not let anyone take it away from him. Carlos will only let other orangutans borrow the toys when he becomes bored with them.

Carlos also likes to grab all the sleeping blankets from the technicians. Carlos grabs all the blankets and takes them to the swing and sits on them so no one can take them away. Some of his friends will try to pull the blankets away but it never lasts long especially because Carlos is dominant and most of the other orangutans will not go against him. When he’s bored with the blankets he will distribute them one by one to other orangutans as if he was a technician.

Despite being dominant, Carlos never hurts his friends. He has many friends in the complex including Paku, Sempurna, Agro, Dewa, and Jack. Carlos will sometimes share his food and toys with these special five friends. Carlos is a very healthy orangutan. He is not a picky eater and is very active. 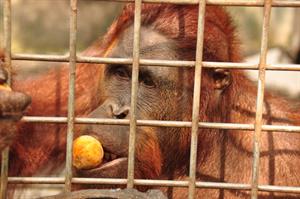 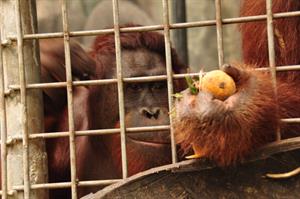 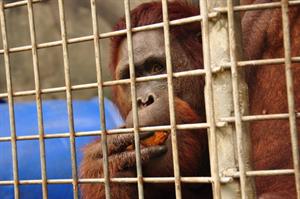