We are contacting you with very sad news I am afraid.  We have received news from Nyaru Menteng that last month that your adopted orangutan was found dead in the Rungan River, 200 meters off Kaja Island.  The veterinarians have performed an autopsy and from the chip the orangutan was identified as Elisa and the cause of death as drowning.  There were no other serious injuries or illness reported from the autopsy.

At the time that Elisa was discovered, the water levels were receding and we think she was testing areas to see if she could cross the river from the sanctuary island she was living on.  If this was the case, poor Elisa obviously didn’t make it.

I am sorry to be the bearer of such sad news. With thousands of orangutans being killed a year, you would think we have been hardened to the death of one, but each death still takes a toll on us.

If you are on auto-renewal for your adoption of Elisa we have transferred your adoption to Monti from the Orangutan Emergency Centre, Ketapang, West Kalimantan. Monti is one of the younger members of the center’s orangutan family. She arrived at the centre at the end of November 2009. See more information about Monti.

If you wish to be transferred to another orphan or cancel your adoption, please call Rebecca on 1300 REDAPE. 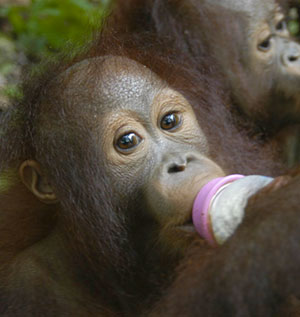