Pinky the orangutan was released earlier this year into Jantho Forest in Aceh Sumatra, but, tragically, was recently found dead after an extensive search. The cause of his death is unknown however a large predator is suspected. Pinky was previously cared for at the Batu Mbelin Care Centre in North Sumatra. Pinky’s previous independent behaviour had proven that he was ready to return to his natural forest habitat, yet no one could have predicted this tragic outcome. Even though the Sumatran programs in Bukit Tigapuluh and Jantho have the highest survival rate of any orangutan release program ever, unfortunately the wild cannot be made absolutely safe.

Understandably, our team, project managers and supporters are filled with grief at losing these two very loved young orangutans [Miriam, another adoption infant, also passed away the same week]. They have been the face for orangutan conservation as part of our adoption program.

Whilst their tragic loss is being mourned by all involved, it is important for us to remember during this time the progress that both of these very important release programs are making in restoring critical orangutan habitats. Over 150 orangutans have been released in Bukit Tigapuluh, an area where orangutans had become extinct, and 38 orangutans in Jantho, North Sumatra to date.

With less than 6,300 Sumatran orangutans remaining, every loss is felt acutely by me personally and our project managers on the ground. Importantly we know how invested our supporters are in their adopted orangutans, and we know you will feel the loss of Miriam and Pinky as much as we do. 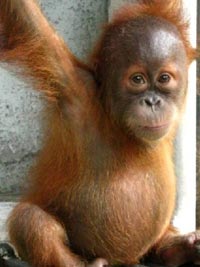