Ugo Blanco has no medical issues of note in the last several months and is growing up a fit and healthy orangutan. He's currently placed in a socialisation cage and has joined into an orangutan play group.

Even though he is more independent now, at times he demands attention from the keepers and sometimes even spits at them if he felt ignored. He is now adept at skills, such as using leaves to make a nest and using the center's enrichment tools. Based on his current health and skills, he is actually suitable to be transferred to Jantho Reintroduction Centre but as he's originally came from Bukit Lawang, the authority of that area (Balai Besar Taman Nasional Gunung Leuser) has made us delay the plan. We hope that this issue will be rectified in the near future. 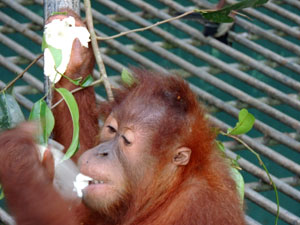 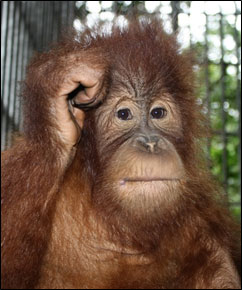