Carlos is hyperactive as ever. He has undergone quite significant physical changes. He has grown much bigger and gained more weight. His hair is now long and he has started to grow a beard. It is obvious that Carlos is entering adulthood and is now ready to roam in one of the pre-release islands.

Carlos has lots of friends, including Lomon, Agro, Paku, Dewa, Madsen, among others. He is a dominant male and rarely looses a competition. Similar to Carmen, though, Carlos still sucks his fingers, especially before mealtime. Maybe that's his way of letting us know that he is excited to be fed! Carlos is not choosy when it comes to food. He can eat anything and has a good appetite. He now lives in the Quarantine Enclosure, because the socialisation Complex (Enclosure Sos-3) is still being renovated. 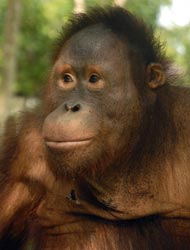