Jarot was sent from reintroduction site in Jambi back to the quarantine center in Medan at the end of August 2012, in order to get medical treatment for an injury.

He fell 12 metres from a tree and hit some hard wood on the ground. This caused fractures of both his tibia and his fibula in his left leg. The staff in Jambi attempted to fixed the break but they did not succeed. When he arrived at the quarantine center, his left leg looked bumpy and twisted, although his general condition was good. As Jarot was still young and growing, the vet decided that surgery was not needed and he simply repositioned the fractured bones and put on a plaster cast to limit the leg's movement and maximize the fixation of the break.

Jarot had his plaster cast on for three months and in November 2012 the vet checked his leg and took an x-ray. It showed that the bones had healed well. Step by step the staff added more swinging enrichment inside his cage to observe the movement of his left leg. He showed good progress and was able to use his legs normally, so in January 2013 he was moved to a socialisation cage with other orangutans. In March 2013 the vet implanted a radio transmitter implant in him and he spent five days in an isolation cage for observations, post the implant procedure. He is now doing very well and in April 2013, was returned to reintroduction site in Jambi  along with four other orangutans to once again prepare for reintroduction to living wild in the forest. 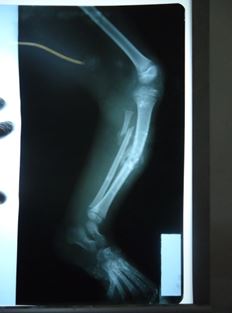 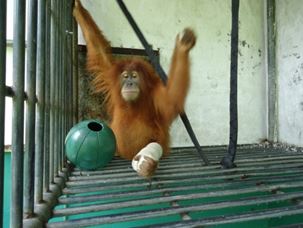 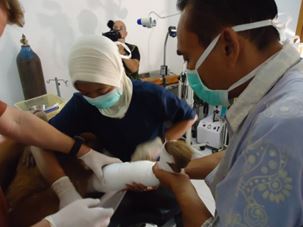